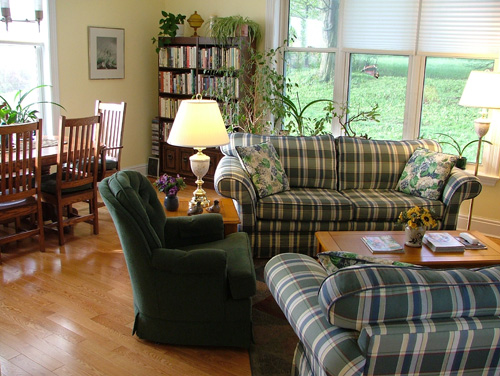 As the spring days lengthen and summer approaches we enjoy, even more than normal, the pleasure brought to us by the addition we made to our house six years ago.
The addition was designed with the help of an architect, even though it’s somewhat simple and most people would just have a contractor rough-out and build. Despite the extra cost, we’re glad we spent the money.

We met with Goderich architect (and Brussels native) John Rutledge in late 2002 for the initial discussions on our plans. I’d worked with John in various capacities over the years, including interviewing him about respecting our traditional Huron County architecture in making additions, so he was an obvious choice when we wanted to add to our turn-of-the-century farmhouse.

We’d lived in the house for nearly 30 years. On the back (south) of the two-storey house was a one-storey summer kitchen and woodshed. We’d tried to renovate the summer kitchen to make it useable but it was always cold so didn’t get much use. The woodshed was a place for junk and wildlife. After all the years, its foundation of wooden sleepers on top of field stones, was crumbing.

Not only was the summer kitchen/woodshed a waste of space, but it blocked off the south and west views from the house. We lived in the country but couldn’t really appreciate the setting. In 2002 an inheritance allowed us to think about finally doing something about replaci

ng the ugly addition.
When we met, my wishes expressed to John were to more or less keep the same footprint as the existing building, but find a way to bring the outside in. I also wanted a building that looked as if it belonged with the century-old main house.
Jill, being more practical, worried about having a large hall for people arriving and lots of closet space. She also wanted a mudroom where I could leave my boots and work clothes so they didn’t have to come into the house.
After looking around and writing down our wish list, John went away to think. Later he sent out a young assistant to measure the old building, the width to the lot-line, etc.
Early in 2003 John came back with preliminary plans for a 500-square-foot addition, almost exactly the footprint of the old building. There were many things we immediately liked.
He’d heard my plea for a bright room to connect the outdoors with the indoors and created a room with three sets of double-hung windows on both the east and south side

s of the room. Along the west side of the new building he’d designed an old-fashioned porch. This was exciting because the west side of our property had been pretty-much a blind-spot from the house.
Jill got her entry hall and a huge closet (it’s the envy of relatives who just don’t have as much space despite having large new homes ).
That closet created a thick double-walled divider between the entry hall and the large light-filled, south-facing room that includes a dining area and a seating area, grouped around a fireplace.
An archway leads from the entry hall, (and the doorway to the main house kitchen), to this room. John made use of the space on the sides of this archway to create two more storage spaces which have proved handy.
Another pleasant surprise was that he’d surveyed the lay of the land and found a way to have this new addition on exactly the same level as the main house, whereas the old summer kitchen had been about 15 inches lower.
The one problem that Jill immediately identified in the plans w

as that the mudroom was missing. After looking at the drawings for a few moments, John quickly sketched in a solution: closing in one end of that long west porch to create a small room off the side

of the addition.
Energy efficiency was high on John’s agenda and he created a room with an envelope of vapour barrier with an insulated floor over a cement pad, 10 inches of attic insulation and walls with six inches of fibreglass plus an inch of styrofoam sheathing.
The old summer kitchen had a small entry porch on the east. John incorporated a rebuilt porch of the same size into his plans.

We had also gone for years without a porch from our front door. John designed a new porch/deck, with the steps turned on an angle toward the main driveway. The space between these two porches created a tiny courtyard which we’ve since paved with flagstone. 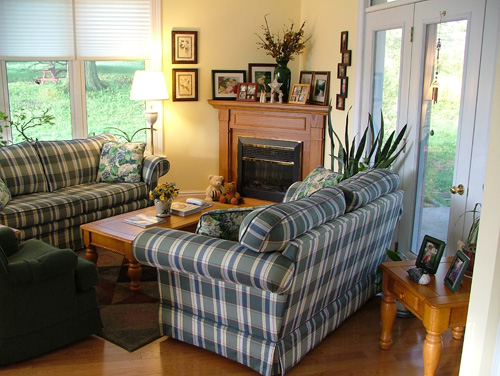 The addition has transformed the house. There are now three walk-outs from the house on the east, west and north sides, meaning th

at on a pleasant summer day you’re never more than a few feet from being able to step outside.
Once we’d worked out the bugs and John finished his detailed drawings, we were fortunate to find a local builder known for his attention to detail. He was also particular about who he hired for sub-trades.
While summer is particularly delightful in this part of the house, it’s a joy at all times of the year. Winter sun invigorates Jill’s large plant collection that give us a touch of summer even when it’s cold outside. The large French doors on the west look out on a woodland garden which in winter is where we feed hundreds of birds, only a few feet from our windows.

In fall, the sun shining through the leaves of the maples a few feet to the south and west, colours the light streaming through the windows. One particular beautiful maple is perfectly framed in the centre of the south windows.
The room gets plenty of use and as bright and cheery as it is, it provides a lift even on those days when the other difficulties of life seem ready to drag you down.

Originally posted to the North Huron Publishing Website on June 15, 2010