Brussels Library one of the original Carnegie Libraries

Brussels was one of 111 Ontario towns to receive a library courtesy of Andrew Carnegie’s generosity. After selling the Carnegie Steel Company to JP Morgan for $500 million in 1901, Carnegie decided to embark on a mission of philanthropy. 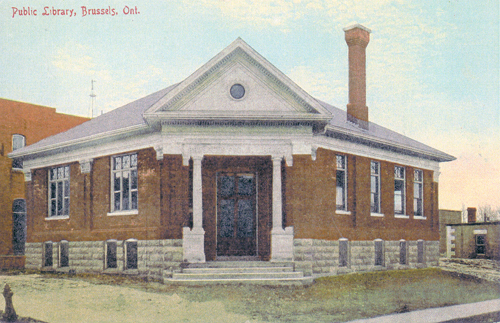 Carnegie invested millions of dollars in various different trusts supporting different causes, but his main achievement was donating over $56 million to 2,500 libraries throughout the world. In 1906, Brussels reeve John Leckie proposed the idea of  a Carnegie library for Brussels to the village library board.
Just under one year later, in February of 1907, Leckie received a letter from Carnegie’s office regarding the status of the current library as well as other factors.
Upon receiving the letter, interviews were conducted with citizens of the area, quite similar to the meetings of the last two years, in order to gauge response to the idea of a new Carnegie library replacing their existing structure.
Initially, Brussels had a library all the way back to 1874. The Mechanics’ Institute Library and Reading Room was located in the Holmes Block above a store and carried the limited hours of 6-7 p.m. on Wednesdays and Fridays and 4-6 p.m. on Saturdays.
Accounts of the early years of the library come from conflicting reports, but there was a fire at some point during the library’s early life, upon which a new reading room was opened, involving two reading rooms above a bank.
In 1880, records showed 28 active members of the library, who paid $1 each to be a member. There were 572 volumes of books available in the library at the time.
The number of members rose to 46, paying the same price per membership, at the time of the fire and the reconstruction.
However, at the end of the century, the provincial government stepped in suggesting free public libraries uniting communities. This is where the municipal libraries boards familiar to us today were born. It was right around this time that the Carnegie proposal became an issue in Brussels.
After some controversy over the location of the forthcoming library, with town hall being removed and then using a lot adjacent to town hall, which were both defeated, a lot was purchased on the corner of Mill and Turnberry Streets from Henry James for $375.
In February of 1909, planning for the new library began, once the grant was received at the village’s library board from Carnegie in the amount of $7,000.
The library board met in late March to discuss the three proposals they had received from three different architects. And although there was a slight protest to the 46 foot by 50 foot building proposal, a Mr. Ireland from Stratford was given the go-ahead to build.
Accepted on May 26, 1909 was the tender received from a Mr. Hunter with a pricetag of $5,960. Carnegie’s office approved the proposal and excavation began in a matter of days, to be completed by the end of the year.
Although the building was not ready for the public by the end of 1909, it was equipped to house a meeting of the library board.
The library did eventually open on Jan. 14, 1910. The librarian was Jessie Kerr.
In just over a year’s time, the library boasted 3,816 books in circulation with 269 people registered as users of the new facility. The users of the library borrowed just under two times the entire collection, 6,209 books in all of 1911.
Up to 1996, 888 cardholders had access to 16,850 books. The catalogue has now been expanded to include movies, magazines, music, newspapers and internet access, provided free of charge.
The library is linked to the Huron County library system, so that books from any library in the system can be returned to any other branch, books can be transferred from branch to branch upon request, making it simple for people to find what they’re looking for.
In addition to the library function of the building, the ample space in the basement has provided a forum for many groups to meet in over the years.
Group meetings began in the basement of the library in 1914. While the Melville Presbyterian Church was being constructed, Sunday school was held there. The Women’s Institute met there. It held Red Cross meetings in wartime, flower shows put on by the Horticultural Society, the OPP used to have an office in the basement and more recently the Centre for Applied Renewable Energy has used it to hold information nights and card parties and fundraisers are still held there quite frequently.
Currently Susan Nichol is the librarian and has been since April of 1981.
Past librarians include: D. Stewart, 1876; 1878-1879, Little Brothers; Mrs. Crozier, 1880; Mrs. G.E. Cooper, 1881; Miss Jessie Ross, 1886-1887; Miss Dolly Shaw, 1888-1895; Miss M. McNaughton, 1896-1908; Mrs. Jessie Kerr, 1908-1917; Mrs. Ida Lowry, 1917-1941; Mrs. M. Ballantyne, 1946-1958; Mrs. Julia Kerney, 1959; Mrs. Florence Smith, 1959-1961; Mrs. Mary Speir, 1962-1964; Mrs. Ethel Long, 1965-1972 and Della Nichol, 1972-1981.